Dan has been working out of London as a full-time artist for 15 years, making his own work and releasing it as and when it's made, and sometimes collaborating with others, including rock bands Royal Blood and Architects, Shakespeare's Globe Theatre, The Folio Society, and as part of various other projects such as creating the opening titles to BBC1's major 6-part drama Requiem. As well as solo exhibitions such as his Ceremon; show at Saatchi Gallery, Dan's work has shown solo and as part of group shows in venues such as The Louvre in Paris, Turin Natural History Museum,Glastonbury Festival, MuTate Britain, Somerset House and the V&A Museum in London. Dan's work is made by collaging, merging, manipulating and building from elements of mainly 1800s wood and steel engravings and his own drawing via tablet and pen and ink. The final images are usually produced as large screen prints, which Dan often adds to extensively with gold leaf, pencil and ink
drawing. "I make pictures that are firmly rooted in the human experience of being a part of the natural world: the dwindling material miracle world of forests, rivers, seas, creatures and skies; and the timeless imaginal realms of archetype, dream, vision, myth and story. I make my work for the joy of making it and as a means to explore the above themes. In a world that is increasingly built on speed, distraction and the dominance of consumerism, concentrating for long spells on a work of imagination and exploration can often feel quite radical. Much of my process involves long periods of time sitting looking at what I'm making, and I think this looking finds its way into the work. Over the years my practice has become a means to investigate and express my enjoyment of making images that I hope speak to the viewer in the same way that iconographical, ancient and outsider art does to me. From cave paintings to Buddhist thangkas to Oceanic art to pagan and Christian icons, 1800s pop art and beyond, the imagery that inspires me generally speaks to me in one way or another about the very strange experience of being alive in the great mystery that we find ourselves in." 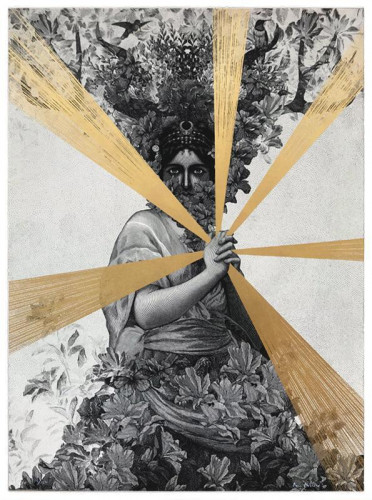